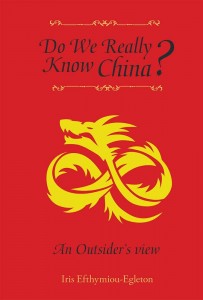 Do we really know China? By Iris Efthymiou-Egleton

Different cultures and civilizations have different perception of a history context and ideas. The Greek philosophers Socrates, Plato, Demosthenes, Aristotle, etc. shaped Western thought, Western logic and built our thought systems. Nowadays we need historical pluralism and to form a cohesive whole, especially in an increasingly multi-polar world. It is said that Western people, from a European philosophical perspective, are only capable of addressing alternate philosophies using our own mindset. China historically saw its civilization as self-evident universal and did not feel the need to justify this in European terms.

Do We Really Know China? provides an overview of the current global position of China, the country’s efforts for reform and global influence as well as its future potentials. These subjects don’t fall far from discussing various economic and industrial facts like the integration of Chinese and European renewable energy markets, the ‘made in China’ phenomenon, foreign policy, and the country’s position as a rising aid donor.

After reading this book, it should become obvious that China sees herself as Chung-Kuo; that means the Middle Kingdom, the centre of the universe, and the world’s oldest culture and society. So one could say that this is what they are trying to do so they can make their country again the centre of today’s world. But during their rise, which they characterize as peaceful, they need to maintain global balance and escape from potential unpleasant events, for example one could think of an analogy of US-China relations and the Thucydides trap.

Its seems so far that all the odds are with them, their soft power in combination with political strategies, their ability to evolve and follow global trends in addition with a huge internal market brought China to its position today. But will China hold this place? Will the country rise to world’s number one, and in China’s way to global dominance, are we expected to see any more reforms? It seems that all these are in the hands of the Chinese.

Find it at Barnes and Noble.com

You can find my  books:

You can find  Copies  of my  books: